In the previous chapters, I explained what the egg represents. Now, I will use the Stanley Kubrick movie ‘2001: A Space Odyssey’ to further prove my point. This movie, and the game are using the exact same concepts. It would be hard not to believe that Rockstar used Kubrick’s way of placing imagery and clues. This is not the only movie of Kubrick’s that Rockstar has borrowed from. It also seems to borrow heavily from Kubrick’s later film ‘Eyes Wide Shut’, which also encapsulates the same theme we are dealing with here. I suggest everyone interested in this subject to watch both movies, at least a few times, as it is necessary in understanding what I will talk about.

Many think the movie ‘2001: A Space Odyssey’ is about space exploration. Here we deal with the esoteric and exoteric once again. Indeed it is, on the surface, about space exploration. However, what it is really about is the story of man’s destiny, knowledge and intellect, and how man will be reborn under the Luciferian doctrine of the Mystery Schools. Kubrick’s movie, ‘Eyes Wide Shut’, explores this idea to its full extent, by exposing the underbelly of this agenda shortly before his death.

In the movie ‘2001: A Space Odyssey’ we see the the black monolith make its appearance at the beginning of man’s life, when man knew nothing. Suddenly, the black monolith appears. Man touched the monolith, and received knowledge and intellect.

This same story we learn from the Bible, in the story of the Garden of Eden, in which the serpent persuaded Eve that if she ate of the fruit, she will become like God.

“You may freely eat the fruit of every tree in the garden— except the tree of the knowledge of good and evil. If you eat its fruit, you are sure to die.”

3 Now the serpent was more cunning than any beast of the field which the Lord God had made. And he said to the woman, “ Has God indeed said, ‘You shall not eat of every tree of the garden’?”

4 Then the serpent said to the woman, “You will not surely die. 5 For God knows that in the day you eat of it your eyes will be opened, and you will be like God, knowing good and evil.”

6 So when the woman saw that the tree was good for food, that it was pleasant to the eyes, and a tree desirable to make one wise, she took of its fruit and ate. She also gave to her husband with her, and he ate. 7 Then the eyes of both of them were opened, and they knew that they were naked; and they sewed fig leaves together and made themselves coverings.

9 Then the Lord God called to Adam and said to him, “Where are you?”

10 So he said, “I heard Your voice in the garden, and I was afraid because I was naked; and I hid myself.”

11 And He said, “Who told you that you were naked? Have you eaten from the tree of which I commanded you that you should not eat?”

13 And the Lord God said to the woman, “What is this you have done?”

The woman said, “The serpent deceived me, and I ate.”

This symbolic monolith in the movie represents knowledge given to man by Lucifer, exactly like in Genesis. We then see an alignment take place. A partial eclipse. This eclipse takes the form of the solar boat of Isis. In the movie, throughout man’s journey of life, this monolith makes its appearance at every great leap of evolution. Man’s sudden leap into space, from its primordial to the technological is made in one scene.

(We see the chimpanzees in Michael’s abduction scene comes straight from this movie.)

From here, we discover that a mysterious artifact has been discovered on the moon’s surface, buried deep within the surface of the dark side of the moon. It is the monolith. The black stone of foundation. Suddenly, an alignment takes place above in the celestial bodies. Again, it is the partial eclipse of the solar boat of Isis making its appearance again. We see that for every time this alignment takes place, and this monolith is seen, an evolutionary leap happens. This is Kubrick showing you the symbology of the Mystery Schools, and man’s leap in intellect through this knowledge.

After this experience, we see that a couple of astronauts are sent into space. Their mission later fails when their computer ‘Hal’ turns on them. Afterwards, we see Dave (the main astronaut in the film) deactivating Hal. Once Hal has been shut down, Dave receives a pre-recorded message from his commander. In this message it states that there was found a 400 million year old black monolith of unknown origin. After this scene we see Dave enter a sort of Star Gate, where he traverses the vast depths of space. We see him grow older, and older. The monolith appears through his journey of ‘illumination’, as he passes by each planet in the solar system, through his initiation and so called ‘enlightenment’. We then see him appear in a mansion, in his much older age. His mansion is rife with the symbolism of the Mysteries. He is growing older by the minute as he looks at himself through time. Suddenly, we see the black monolith before him in his dying bed. He reaches up to touch the stone, to make one last evolutionary leap. Suddenly, he becomes a fetus in an egg floating above his bed. In the following scene, we see the camera roll into the monolith, and we see earth. The child is seen floating above the earth in its egg. We see a shadow covering one of its eyes as the sun illuminates its face. This is Kubrick’s use of symbology once again. This is the representation of the rebirth of humanity into a New Age, under the Luciferian doctrine of knowledge and intellect. The doctrine that through knowledge and intellect, man can become God. It is showing the last evolutionary leap man must make to survive in this New World Order. This is what the Mystery Schools believe.

GTA V is also showing you this same message with its symbolism. Here is a short clip made using ‘2001: A Space Odyssey’ to show exactly what I have explained above, and then applying it to GTA V.

Also, if you look at the sun, you will also see that it is designed to clue you into this. The sun, in-game, looks exactly like the glyphs and the mural depiction. Without a doubt, the symbol on the mural is the sun, which is meant to represent the symbolic ‘Light’—illumination of man. It represents how man must embrace the so called ‘Light’ of the Mystery Schools. Embrace the light, praise him, are all euphemisms for Baal worship. As above, so below. What reflects above, reflects below. Apply that to the Altruist camp. Below, there is a resurrection cave, in that cave is a ram skull. It represents the Ram/Goat of Mendes. What is below tells you what is happening above, and vice versa.

One of the reasons the yoga mat is located toward the East, is because the sun rises in the East, and falls in the West. The East is where the Masonic lodge is placed, to capture the energies of the sun. This is one example. A known Masonic phrase is “Are you traveling East to West?” For the sun rises in the East, and sets in the West. That is why the resurrection cave is located in the West, for every day the sun dies, it is reborn again in the East each morning. That is the reason for the mat being placed toward the East. You see, it is all symbolic of the Mystery Schools.

The lines on the Textile Mural are a callback to the Egg of the mural. Just as the Maze Bank fountain is a call back to the egg by referencing the Egg of Life. These two clues not only tell you what the egg is, but the entire nature of the egg is revealed. This can be confirmed from the Textile City mural, which mirrors the same lines as the mural. It is very hidden, as are the lines, but if you take it into a photo editor, you can see the words ‘begin’, ‘lust’, ‘believe’, and other hidden words. The hands pointing upward with the triangle formation is a Masonic hand sign, which represents deification of man into God, which I have discussed at length thus far as a repeating theme. Also, spider webs are found on this textile mural, and that too is mirrored on Chiliad. The web is directly off of the United States one dollar bill, which represents societal cohesion.

This is a play on the Bible verse in Matthew 19:26, which says “With man it is impossible, but with God all things are possible.” So right there, in that quote, it is telling you that man is God. With men ALL things are possible. You can also see that a pyramid and capstone has been intentionally formed by the A in the word ‘are’.

While these lines are not exact, this was done on purpose as not to be blatantly obvious. These same lines are also used on the Maze Bank fountain. “Upwards flows the Truth form”, and other such places. From bottom to top. The hands being positioned as they are, reflect the mural, from the Egg to the Eye.

This brightest light leads to the Tivoli Theater, where we can see more symbolism. Note the Capolavoro banner across the front of the theater, and the pyramid in the logo.

Once again, the lines of the mural make their appearance in the form of red lines here in Tivoli. This indicates to the viewer to take notice of what is surrounding these lines. 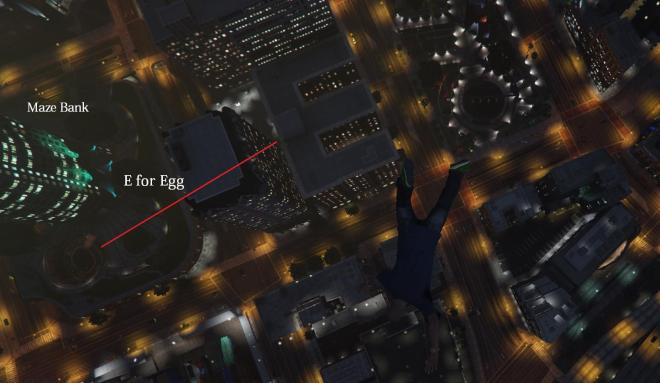 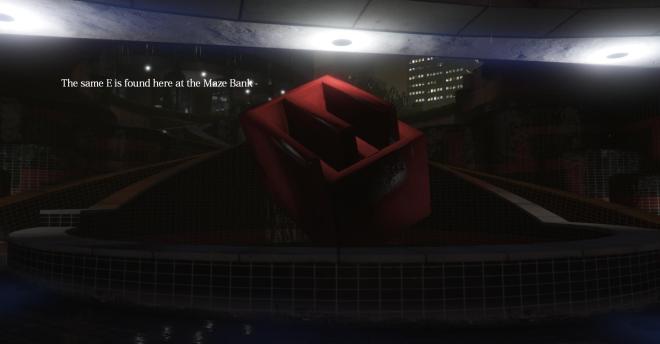 And again, the lines of the mural make their appearance here at the Maze Bank fountain. 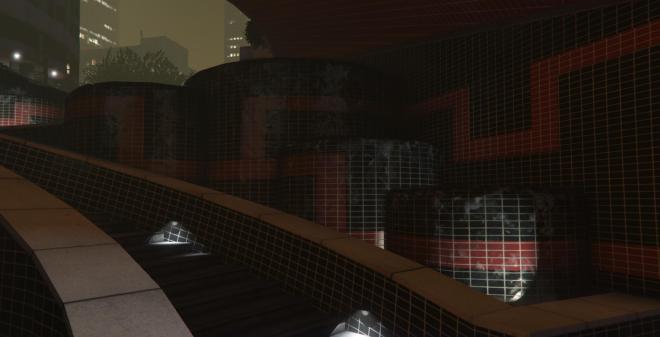 Continued on next page >